This adventure really got started way up in the hilly jungle when an old man with a hatchet and a calculator watch invited me to the royal bathtub, but you have to understand how I got there first.

I had spent one week visiting the temples of Angkor near Siem Reap, Cambodia, before the scale and significance of the ancient Angkorian Empire really dawned on me.

I already knew some amazing facts. For example, the city of Angkor covered more area than modern day Los Angeles, and the main pyramids of Giza would fit inside the moat of Angkor Wat.

Still, I didn’t really get it until I arrived here, on the shore of the West Baray, perhaps the largest hand built water reservoir in the world. Ever. 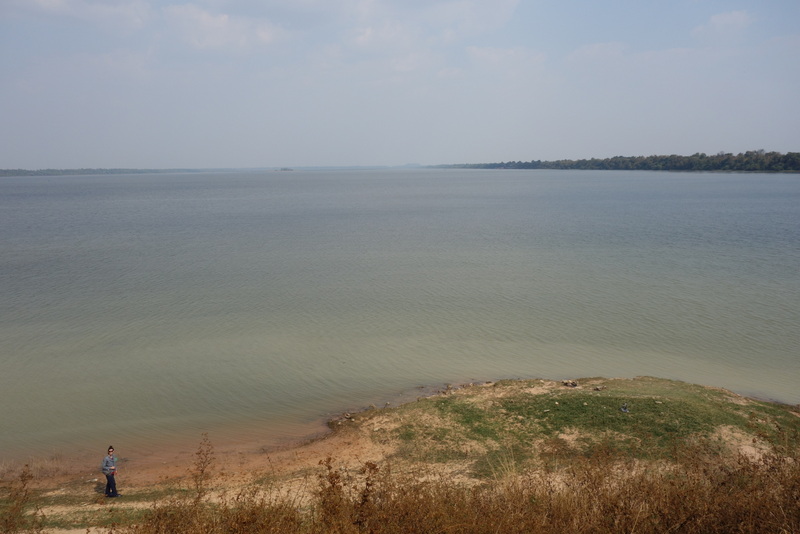 The West Baray is eight kilometers long by two and a half kilometers wide, and it was built using iron hand tools to create a massive rectangular embankment. It’s a small piece of an enormous hydraulic engineering project that enabled rice agriculture through the wet and dry seasons and allowed the Angkorian Empire to flourish. Stéphane de Greef, a Belgian cartographer and engineer based in Siem Reap, brought me here on the back of his dirt bike.

Standing on the shore, an idea started to grow: I wanted to follow the water. The water would help me understand the land.

Stéphane and I came up with a plan to trace the sacred waters of Angkor from their source in the mountains to their mouth in the Tonle Sap, the largest freshwater lake in Southeast Asia.

We’d start on his dusty dirt bike and end in a very skinny boat. 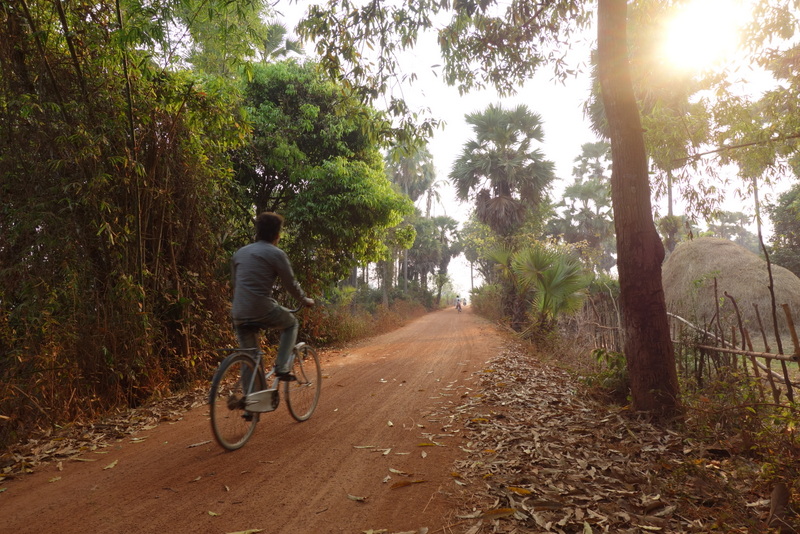 And we looked good. 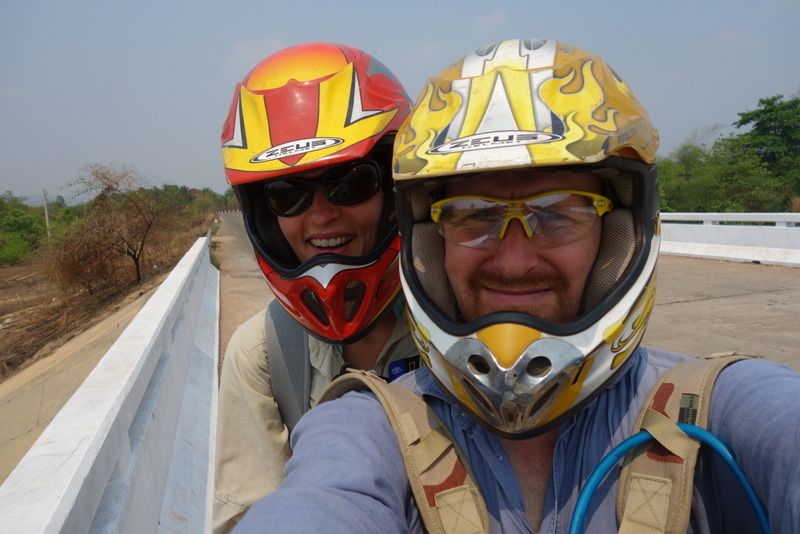 After a skeleton jangling ride and a short hike to the headwaters (called Kbal Spean, “head of the bridge”) two things caught my attention simultaneously.

1) The sandstone banks were carved, in situ, with god figures, animals and hundreds of fertility symbols dating to between 950 and 1100 AD. Water had been flowing over these works of art for centuries, and as we arrived, a man was splashing water over them to clean them, a ritual that likely began hundreds of years before. 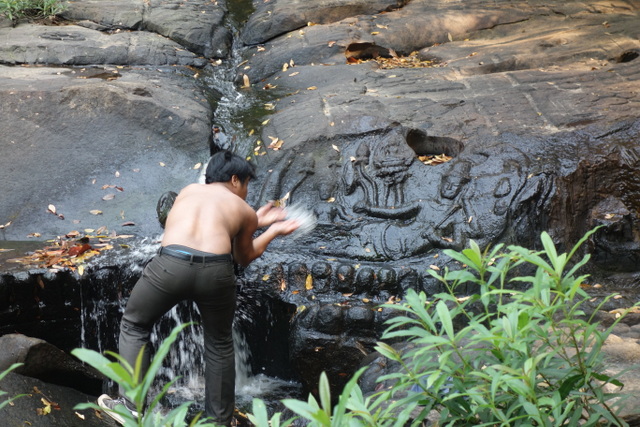 2) Despite the stunning surroundings, I couldn’t stop looking at one man, a custodian of the site. He was an elder but his age was impossible to guess. He had a high cool factor with six-pack abs, a calculator watch (“From China,” he said with a smile), and a red checked Khmer scarf tied over his ball cap. His uniform shirt slung over one shoulder. 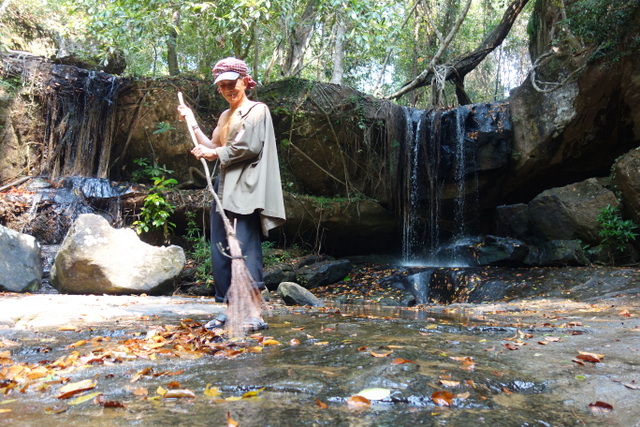 Stéphane toured me around the carvings, and we ended up with the custodian, whose name is Kort (he wrote it in the dirt for me). He spoke English, French and Khmer, and he offered us a special tour – on the other side of the rope barrier. Kort cleaned hidden Vishnu carvings so I could see them and pointed out the inscriptions carved into the rocks. Further on, he pointed down to a deep rectangular basin filled with water. “A bath for the king!” he said.

(I’ve since learned it may or may not have been used as an actual bathtub.)

I felt so glad that Kort had taken extra time with us even though I didn’t have much to give back. I was about to head down the trail when Kort started writing on his hand with a ballpoint pen. 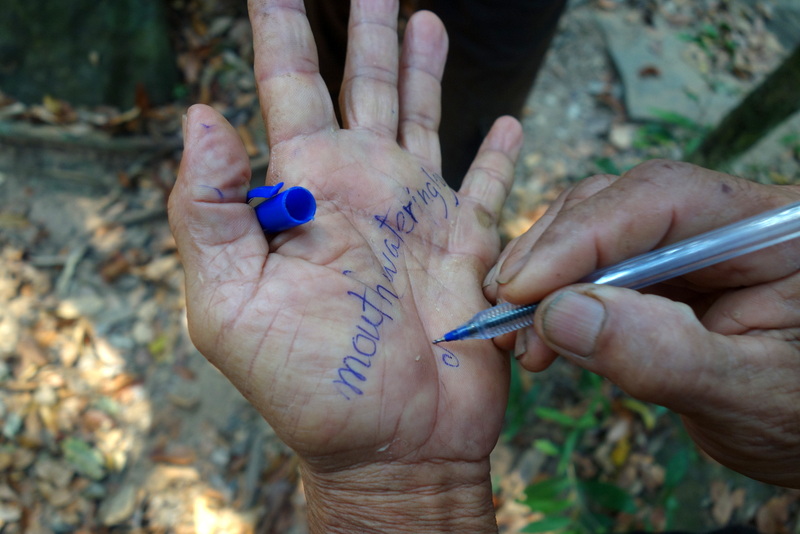 “It’s when something is so delicious.” I explained, “You know when you are hungry and you smell something cooking and your mouth waters? Like that. Mouthwateringly delicious.”

Kort is a gleaner of language as well as history, learning ancient and modern communication while he clears the leaves from a mountain path. At least I could leave him with one new word.

I took this as an auspicious start to a long and hot journey. Ahead lay the river, an orchid expert with the village gossip, water buffalo protecting a lost temple, biting ants, a farmer in dress pants, a 1,000 year old channel, famous temples, a chain-smoking boat driver, adjutant birds and the breathtaking opening into a fresh water sea.